When you’ve traded the financial markets long enough, it seems that you already know everything about charts.

And yet, when you go back to classic chart patterns, you understand that there’s so much more to learn.

We decided to brush up on the candlestick charting basics that Steve Nison put together for us back in 1991.

We’ve prepared the top 6 tips on how to trade candlestick patterns. Read on to find out:

This is exactly the knowledge base every trader needs to be successful.

Not a “reversal”, but a “trend change”

In his book “Japanese Candlestick Charting Techniques: A Contemporary Guide to the Ancient Investment Techniques of the Far East” Steve Nison writes:

“The term “reversal pattern” is somewhat of a misnomer.  Hearing that term may lead you to think of an old trend ending abruptly and then reversing to a new trend. This rarely happens. Trend changes usually occur slowly, in stages, as the underlying psychology shifts gears.”

Now, read this last passage again, try to comprehend and visualize it in your head as you read it. And we’ll just show you how it looks on the chart: 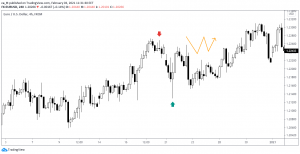 There are 2 reversal signals on the chart: a shooting star (red arrow) and a hammer (green arrow).

Both signals can be interpreted as reversal signals. Although in fact these candles always indicate just one thing: the change in the mood of market participants.

In the chart above, the price starts moving sideways right after these reversal candlestick patterns appear. As we can see, the trend hasn’t reversed but changed into a sideways trend.

Do not trade against the trend

“An important principle is to place a new position (based on a reversal signal) only if that signal is in the direction of the major trend.”

It’s an extremely simple rule, but many traders somehow ignore it.

When the market is moving up and demonstrates a clear uptrend, what is the point of trading against it?

As you can see from this chart, just one trend trade can make you a fortune, while four trades against the trend can wipe out your account completely.

The trend exists because trading psychology doesn’t change as the years go by.

When most traders are buying, why go short? On the contrary, you need to wait for someone to “stumble” and make the wrong decision … and enter the market against their position.

Close positions based on candlestick signals

In a rising market, one shouldn’t go short based only on a bearish reversal signal, but it’s better to exit your long positions. When you’ve just opened a trade, but a reversal candlestick appears right in front of your nose, close the position immediately: 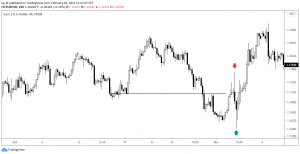 In the screenshot, we have a trending market and an entry from the swing zone.

But as soon as we opened our position, a powerful reversal signal indicating a trend change appeared. So, in this case, it’s best to exit the trade.

Carefully monitor and analyze candles that signal against your trade.

“A hammer is a bottom reversal pattern. One of the criteria for a hammer is that there should be a downtrend (even a minor one) in order for the hammer to reverse that trend.”

There are two types of trend reversal patterns:

As traders, we are always looking to enter a trade at market bottoms and exit at tops.

In the example below, you can see that a candlestick pattern is considered a reversal pattern if it appears after a trend.

That is, the context in which the candlestick is formed is extremely important: 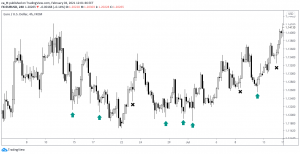 “The longer the lower shadow, the shorter the upper shadow and the smaller the real body the more meaningful the bullish hammer or bearish hanging man.”

A candle consists of 3 complex elements:

Judging by these elements, you can determine the candle’s strength. And as we’ve already learned – we should always take the context into account. It can be far more important than one particular candlestick. 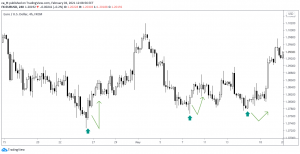 All formed at the bottom of the market, but they all have different characteristics:

The stronger the candlestick, the more powerful the momentum – the rate of acceleration at which the market will be reversing.

The clearer the candlestick context, the higher is the possibility for reversal.

Candlestick analysis itself is a valuable forecasting tool in a trader’s arsenal, but candlestick signals become even more important when they are confirmed by other technical indicators. In other words, the more patterns blended together in one place you spot on the chart, the better:

On the chart above, we can see a combination of 3 technical signals:

Another interesting thing is that candlesticks often appear exactly where technical indicators merge. So, the “blending rule” works the other way around.

So, did you learn anything new? We hope you found our article useful and refreshed your knowledge of candlestick patterns.

By the way, which tip do you find the most useful and why?

Was this article helpful? Please, share it with a friend.

Still doubt if trading is for you?  1,000,000 clients who once doubted too are now successfully trading with us. Open an account and see for yourself that they made the right choice.

There are hundreds of different strategies to choose from. Some of them are suitable for beginners, others are more popular among seasoned traders.