Two months into the year, and the FX market is still yet to develop a sense of direction. That is, at least in the most liquid pairs, with new driving forces absent and news flow pale. March, however, is looking much busier with a number of major events coming up. Front and center are, of course, the U.S.-China trade talks. The two sides are unlikely to reach a deal by the original deadline of March 1, but Trump will surely push for an agreement by the end of the month. Delaying it any further would be difficult for political reasons.

Beijing and Washington reaching a deal would be a headline big enough to trigger another wave of risk buying across all asset classes. The magnitude of the market’s reaction will be largely determined by the details of the agreement. Rumor has it the U.S. wants the yuan to strengthen—and it isn’t out of the realm of possibilities. Over the recent years, global dollar weakness has almost always translated into a stronger CNY, and it can very well happen again. Yet, this is only one of many options that are on the table.

Importantly, we don’t believe the negotiations can fail. The U.S. market plunge at the end of 2018 demonstrated just how interconnected China and the United States have become. Letting stocks tumble again would mean a serious political loss for the president, and this will help him find common ground with Beijing. A negative outcome, however, can’t be ruled out completely. The implications are clear here: failure to reach a deal would escalate the trade war and strengthen the dollar—but we currently judge betting on this as unreasonable. 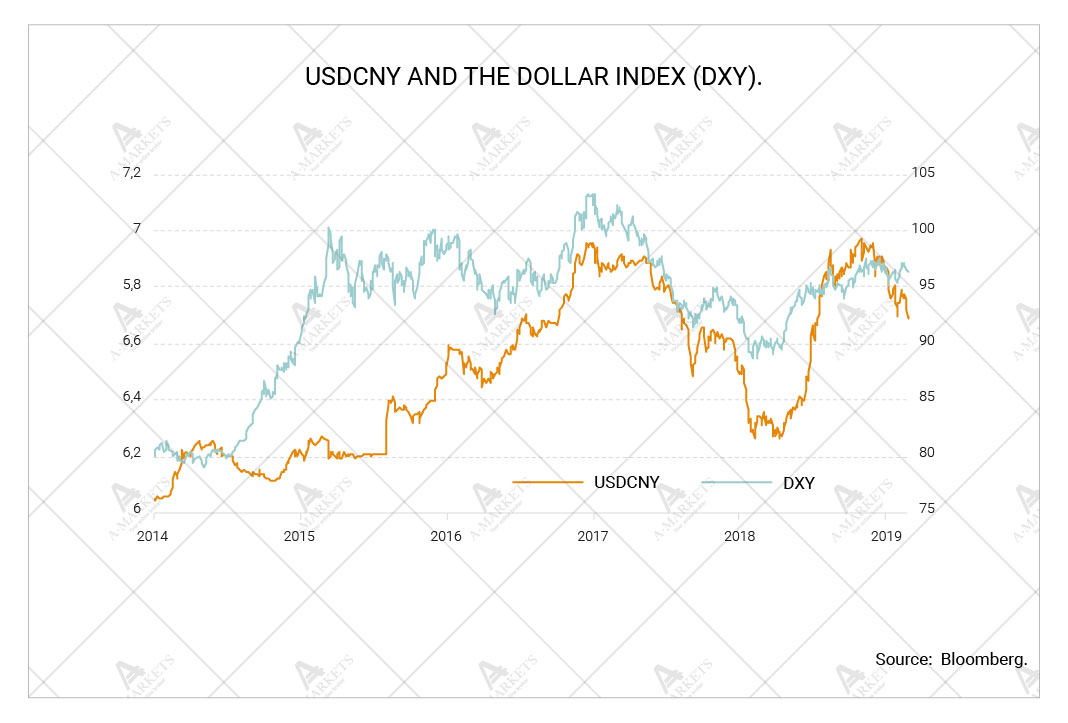 Another critical event happening in March is the “meaningful vote” on Theresa May’s Brexit deal. We’re still calling it “Brexit,” but if no breakthrough is made by the deadline of March 29, the UK will be looking to not just exit, but rather fall out of the bloc. That is, unless a few new factors that are arising as the departure date looms.

First, Theresa May went all-in and promised to hold a “meaningful vote” on her plan by March 12. If the MPs reject it for a second time, the deal will have to be rewritten. The PM is clearly trying to win some time for negotiation here, but the chances of it succeeding are getting slimmer by the day.

Plus, there’s now a second option. The EU is considering a 21-month delay to Britain’s departure, and London’s reaction appears to be positive. The MPs are simply being cautious of the impact a poorly handled Brexit could have on the economy. Should the nearly two-year transition period be accepted, one could even be looking at the possibility of a second referendum on Britain’s EU membership. Whether or not it happens is a tale for another time, but the news flow should provide nice support for the pound. 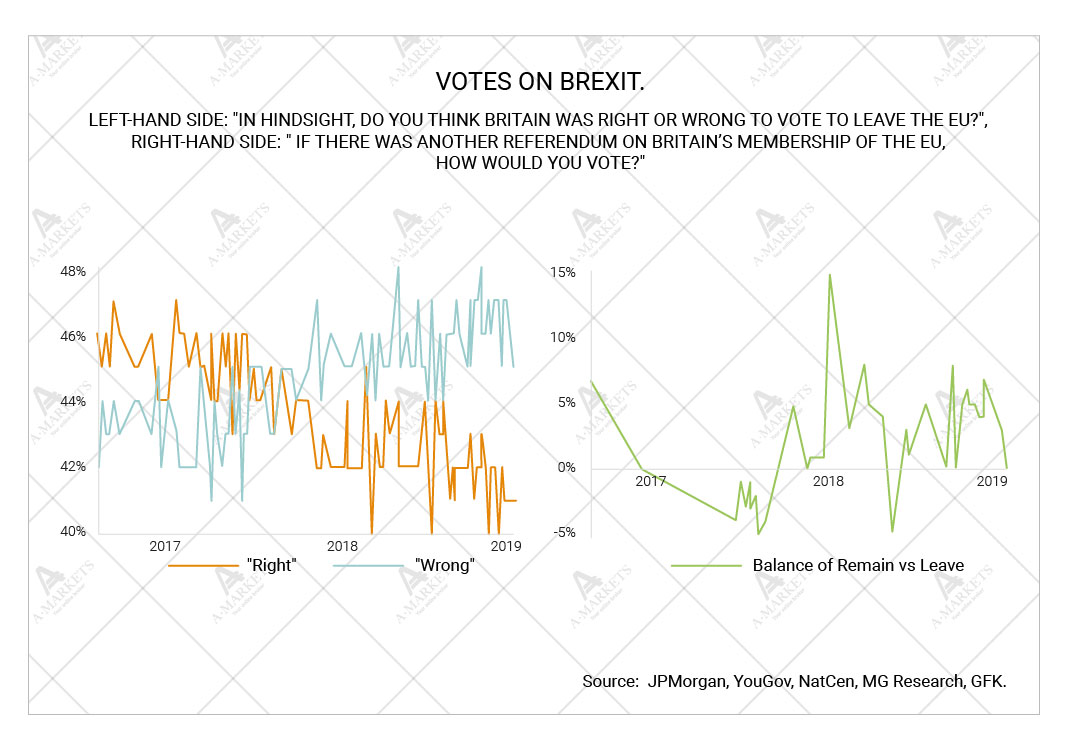 Then, of course, there’s the dovish Fed. Some believe that Mr. Powell was simply moving toward a looser monetary stance with his December statements. We, however, remain confident that we’re witnessing fundamental changes in how the FOMC conveys its views. We discussed this in detail in our November and December reviews.

Here’s a quick rundown: in June, the Fed will sponsor a research conference where it is set to discuss its monetary-policy strategies and review its inflation target. The issue is not taking it from a certain numerical value (currently 2%); it is all about a complete overhaul of the Fed’s tolerance for inflation, and the formal policy criteria. Best guess is they’re going to target average inflation over a business cycle. 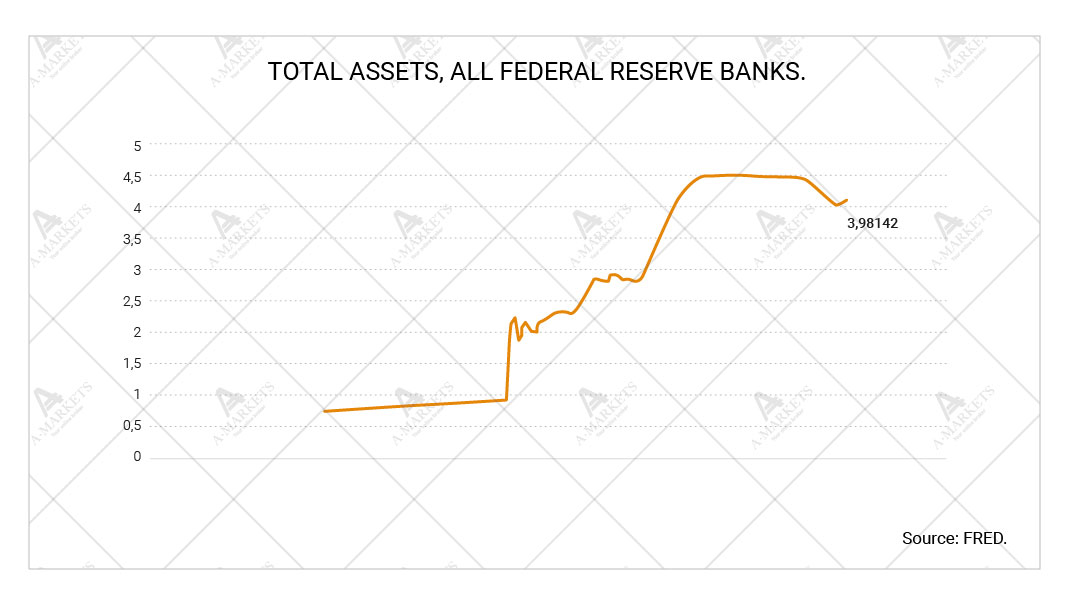 In fact, the central bank might have already started the strategy shift without awaiting the academic approval. This could partly have to do with the fact that the second and third leading positions at the FOMC are now held by Richard Clarida and John Williams, and both have been focused on the issue of low inflation expectations in the environment of still low interest rates.

After all it was Clarida who voiced the Fed’s unusual message in February, saying that if the central bank finds itself in a situation where it has to cut rates back down to zero percent in response to a recession, it would be willing to consider other options, which it had previously rejected. One of them being openly targeting bond yields. This doesn’t mean the Fed is ready to add employ those tools just yet, but it is surely willing to explore. 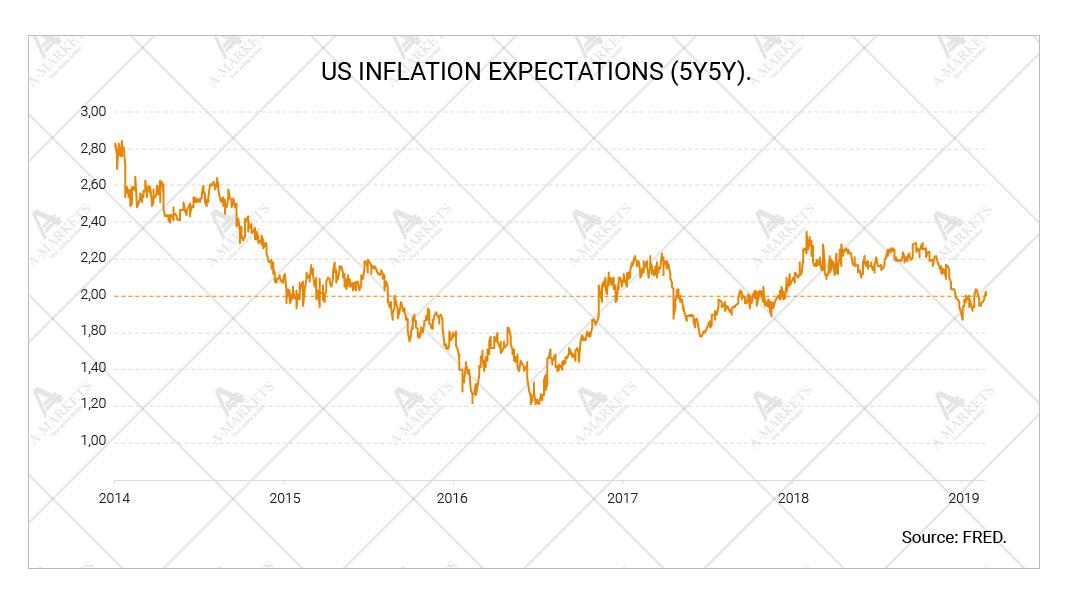 If the above is true, the implications for the debt market, as well as the dollar, are fundamental. In this scenario, the entire span of nominal rates will shift higher, and dollar weaker. If done right, things should go smoothly. Say, the Fed is ready to tolerate a temporary inflation spike towards 3% instead of the current 2%. In theory, the rates would also need to adjust by only 100 b.p. But one needs to keep in mind the magnitude of uncertainty this would infer. And on top of that, Donald Trump is very likely to be re-elected next year, and he’s not the one to play it safe with lenders.

For now this story is reflected mainly in commodities, as well as some dollar weakness against EM-currencies. RUB, MXN, ZAR were all strengthening throughout February, and could gain another 3-4%. As usual, we avoid the rand for fundamental reasons, but still see value in the rouble and the peso. 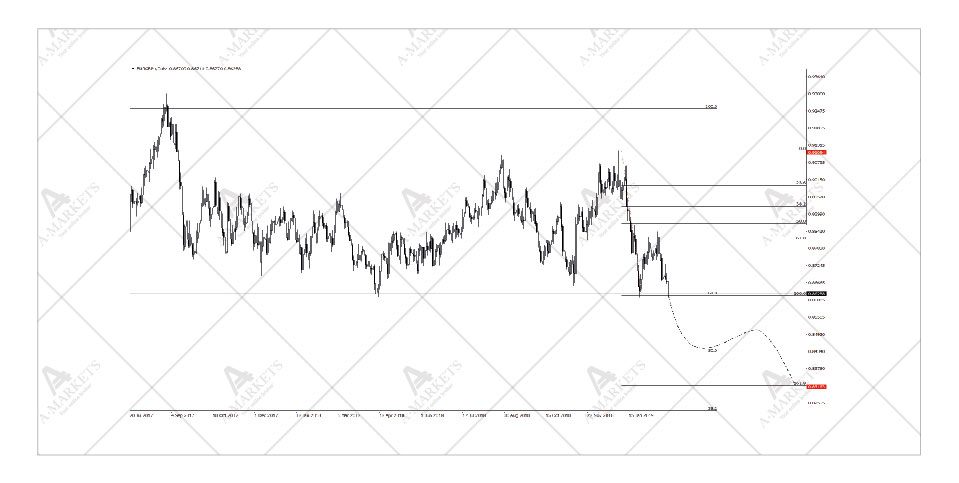 EURUSD continues the lack of activity which has been remarkable. Just when you think the ranges couldn’t get any slimmer, the bounds are narrowing again. Of course, this will eventually resolve as a massive volatility spike, but the direction of the price move is yet unclear. We stick to our targets of 1.176 should it go upwards and 1.071 for a downward move.

As the main pair is hibernating in a narrow range, a trade alternative would be EURGBP. Last month we outlined it as a good candidate for a short trade. The idea was to get into a short position in euro-pound at the correction to 0.886. Alas, given the euro’s extremely low volatility, the cross never reached that level, getting very close with a high at 0.884. At the moment of writing, the prices are back to 0.86 and are testing that support level. From the technical viewpoint, not much has changed in the past month: the pair needs to break the support to move towards 0.841 and possible as far as 0.832.

Now fundamentally, the picture got much brighter for the pound. Theresa May went all-in, announcing a “meaningful vote” on her Brexit plan by March 12. In response, Labour leader Jeremy Corbyn said he would support a second referendum, something he’d never voiced before. Brussels doesn’t seem to mind this either. The bloc has reportedly signaled that it is willing to grant a 21-month extension. All of the above should give nice support to the sterling.

Low volatility across main assets makes us turn to the long-term strategies, and a short AUDNZD is one of them. This was among our trade ideas for H1 2019 and things are going exactly as anticipated here. The cross is feeling the pressure of a weaker China and is slowly but surely grinding towards parity. Recent data on all Asian countries, specifically the fall in exports to the PRC, further confirms the country’s slowdown.

The logic behind the idea is very simple: Australia is much more exposed to China via its external trade channel, and thus the Aussie is falling sharper than the kiwi. All we have to do now is be patient, collect positive carry, and keep an eye on the market. As expected, the technical picture remained unchanged with all the targets just above the 1 mark.

USDRUB: later stages of a downward trend, but potential remains.
We remain short USDRUB, move the target to 63.5, stop-loss remains at 68.8 (entry point). 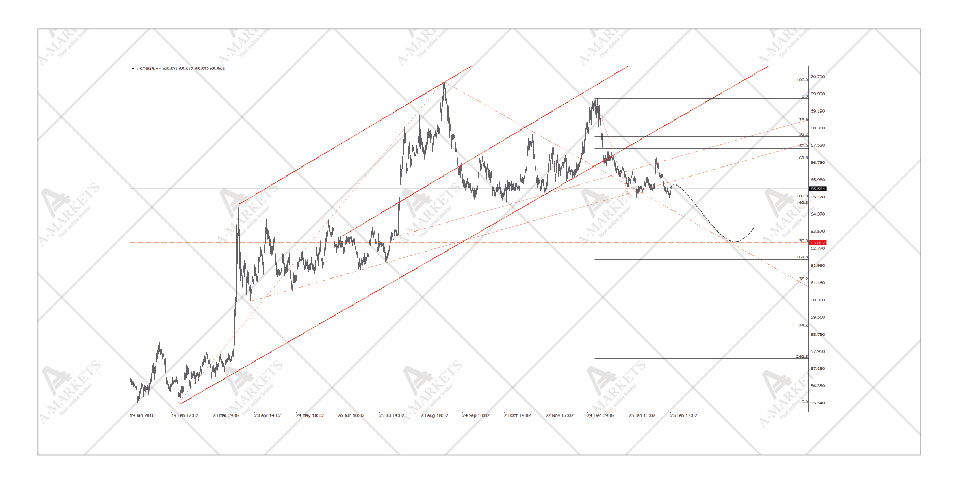 Our outlook for the rouble has persistently been in the minority camp. We viewed USDRUB moving toward the 70 mark at the end of 2018 as an inadequate market behavior amid low liquidity and remained unequivocally bullish on the RUB. And it has paid off: at the moment of writing this review, the pair is trading at 65.5. Unlike EURGBP or AUDNZD, however, there’s not enough room here to go short. If you didn’t buy roubles, it’s too late to do it now, and if you’re looking to sell them, wait for the rates to reach the 61.7-63 range.

Those who have opened a position should keep it for a bit. First, there’s support from the accumulated positive carry. Second, the landscape is favorable for EM-currencies in general. We see the entire EM-space strengthening by 3-4% more, specifically the Mexican peso. In fact, USDMXN is last train you can try and catch. We expect market dynamics to remain favorable for risk-related assets, among which are all EM-currencies, for another 2-3 months. 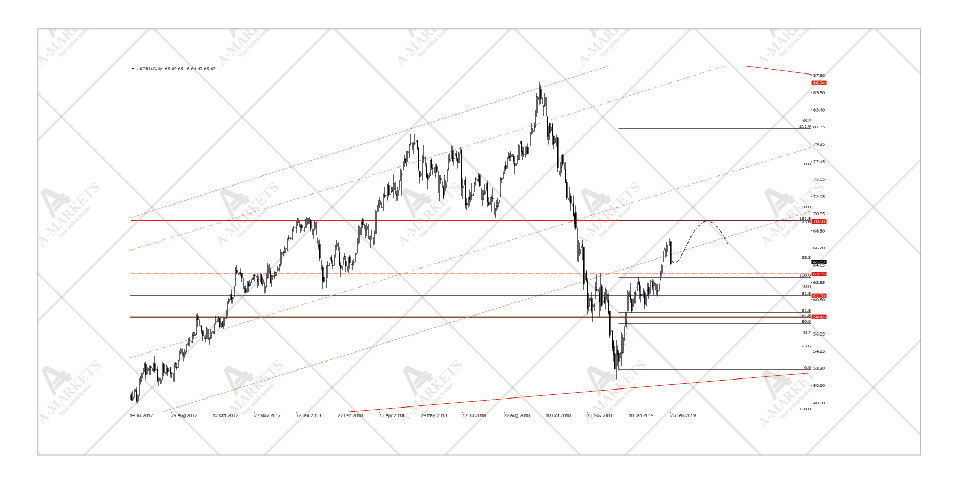 It’s no accident that the section dedicated to oil is last in our review. This publication was nearly ready to go live when the ever controversial decided to send out another message to the world. The American president brought out his Twitter fingers to call on to OPEC to “relax” and “take it easy,” adding that oil prices have gotten too high. As a result crude oil prices tumbled more than 3%.

Yet essentially the retreat makes zero sense. Oil prices are drawing support from decreasing supply, stable demand, and some monetary loosening. Trump’s verbal interventions are highly unlikely to have any stable effect. From the technical viewpoint, the correction ended exactly where it was supposed to. Bret prices tested the support level just below $65 a barrel before resuming the uptrend. We view Trump’s tweet as a gift and a good opportunity to go long on oil (both Brent and WTI). The next targets for the North Sea oil lie at 70 and 75 dollars a barrel, and both look reachable.

However, it has to be noted that the fundamental background for this asset class is not improving any longer. The Chinese slowdown story will sooner or later move from region-specific assets (such as the AUDNZD) to the market in general, and commodities will become quite vulnerable. The long-term technical picture isn’t looking good either. The growth over the past two years is simply a correction following the collapse in 2014-2016. The final target there is below $30 a barrel. But that’s the long-term—speculatively, the positive outweighs the negative.