U.S.-China trade war remains the key issue driving the markets. So far the risk-off reaction has been muted relative to the scale of challenges. It seems like investors are not ready to accept the notion of further escalation, as the two countries are viewed as too dependent on each other. While this is undoubtedly so, there is clearly room for further deterioration. Moreover, there are few opportunities left to stabilize the situation. June 1st is the date when higher tariffs kick in on both sides. Should the parties suddenly settle the matter on May 31st, global trade would avoid another hit, but this is highly unlikely. The last chance to talk is the G20 summit, taking place in Osaka on June 28-29th. And that is it. 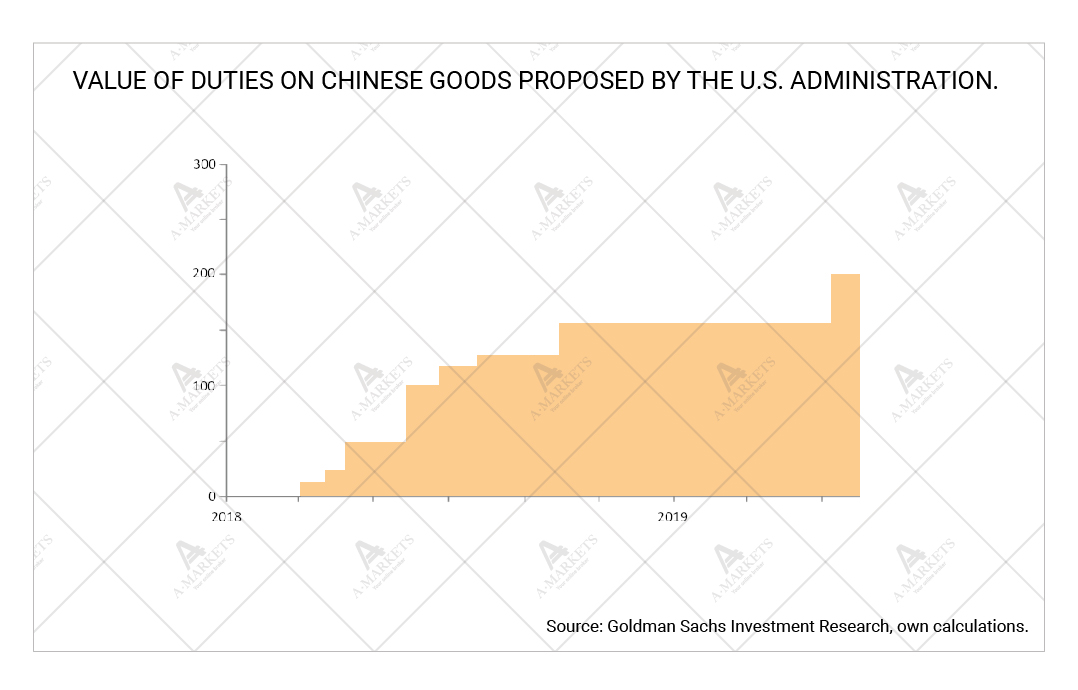 A meeting between Trump and Xi is still likely, we do not believe it will yield any meaningful results. The U.S. administration’s use of heavy artillery against Huawei was a point of no return. Hu Xijin, the editor-in-chief for the Chinese ‘Global Times’ newspaper, publicly made the point. To quote, “US crackdown on Chinese companies including Huawei is no longer like a trade war. The US is shifting from protecting its interests to destroying China. It increasingly resembles air striking Chinese high-tech companies. China is mulling qualitative change in countermeasures.” Beijing often voices the loudest political messages via public figures who are not politicians. Yet this should be taken as an official statement.

The least damaging option on the table is a ceasefire. This can be discussed at the G20 meeting, but the best-case scenario means only temporary relief. The worst case is China internally concluding that the talks are hopeless. The first indication that things have taken the turn would be USDCNY crossing the 7.00 mark. We also now think that the PBOC will cut rates this year, but it would very telling if it does so sooner than the Fed. Under current circumstances, the side effect of monetary policy loosening, again, would be a weaker currency. Therefore, any decisive move on the central bank’s side should also be taken as a dire warning. 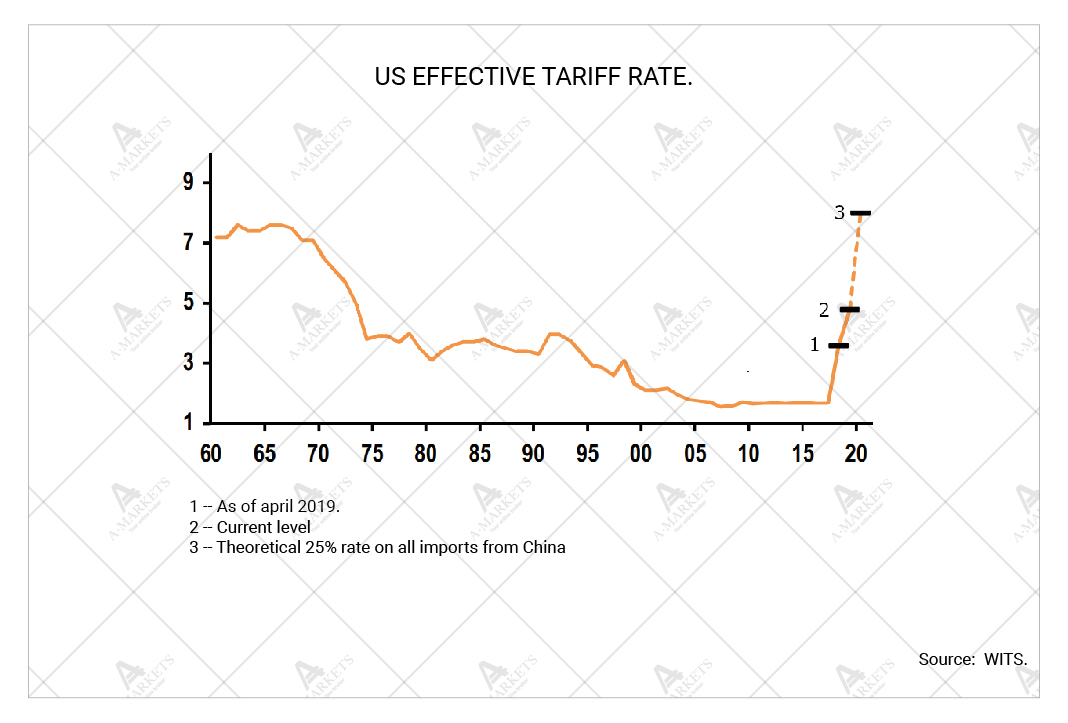 Then there is the story of Mexico. Trump slapped a 5% duty on all the imports from the country to the U.S., effective June 10th. Mr. Tariff demands that steps are taken to curb the flow of migrants. If that doesn’t happen, the rate will rise by 5pp every month until it reaches 25% (and there are few reasons to believe it won’t). The Mexico episode should not be easily dismissed, as it is the second- or third-largest U.S. trade partner, depending on the measure. Generally, cross-country flows in North America have been extremely tight as the region relied on the unimpeded transfer of goods and services. This is now at risk. 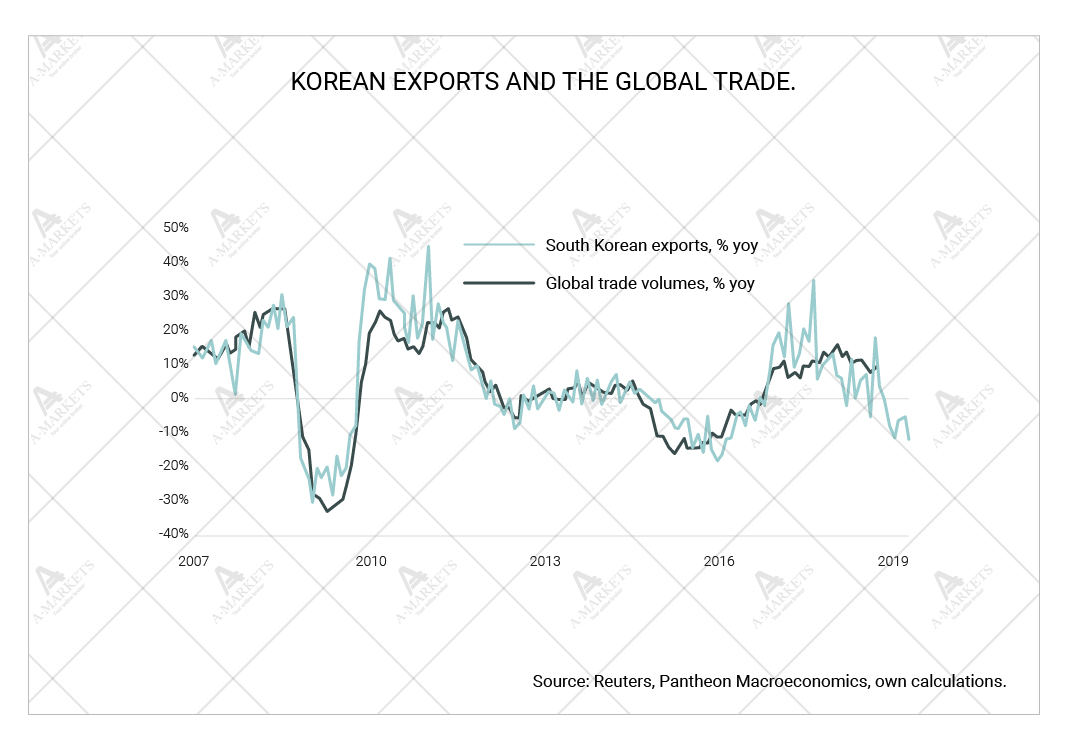 These dramatic developments have significant implications. First, global growth is now nearly guaranteed to slow further, by about 0.5 p.p. over the second half of the year. The drag will come simultaneously from the two largest economies in the world. The big unknown is how exactly emerging countries bear with all the stress. Originally the narrative was that the American demand would shift from China to other manufacturers. But now that this demand is set to drop, voids will appear. We believe that the risk of a cross-market contagion is uncomfortably high. Our models now give a 60% probability of a major jump in volatility both in DM and EM in 2H 2019. 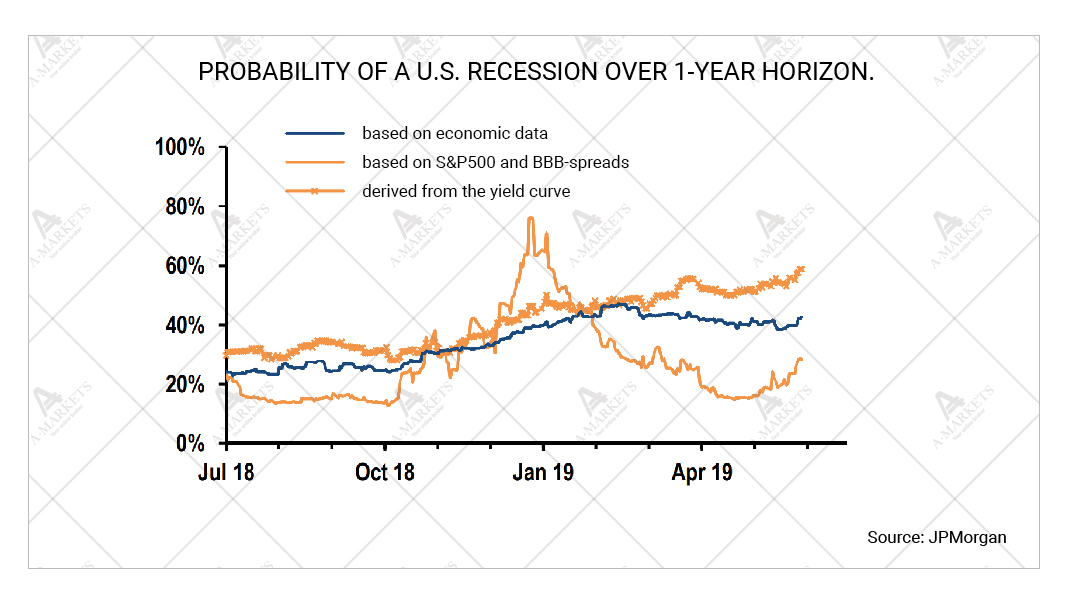 The U.S. recession has also become likelier. The treasury yield curve is moving deeper into inversion, and this is now undeniably a sign that the economic cycle is ending. The odds of negative GDP growth in the United States over 1 year horizon have risen to 60%. We intentionally quote the works of JPMorgan analysts on the issue, as similar quantitative indicators are not a coincidence. The expectations of rising volatility in the second half of the year and a recession in the early 2020 match perfectly, as market events usually precede challenges for the overall economy.

Second, the market is now expecting at least one rate cut this year. On a 12-month horizon, three rates cuts have been nearly priced in. This by itself is a reason for the Fed to consider policy easing. The governors surely do not want to disappoint investors when things are as fragile as they are. Just like it was the case with Ben Bernanke 11 years ago, the FOMC might actually lower rates before turbulence sets in. But even if this happened tomorrow, the move would come too late to avert a market meltdown. However, if the Fed proves proactive, the U.S. recession might be shallow and fairly short-lived. 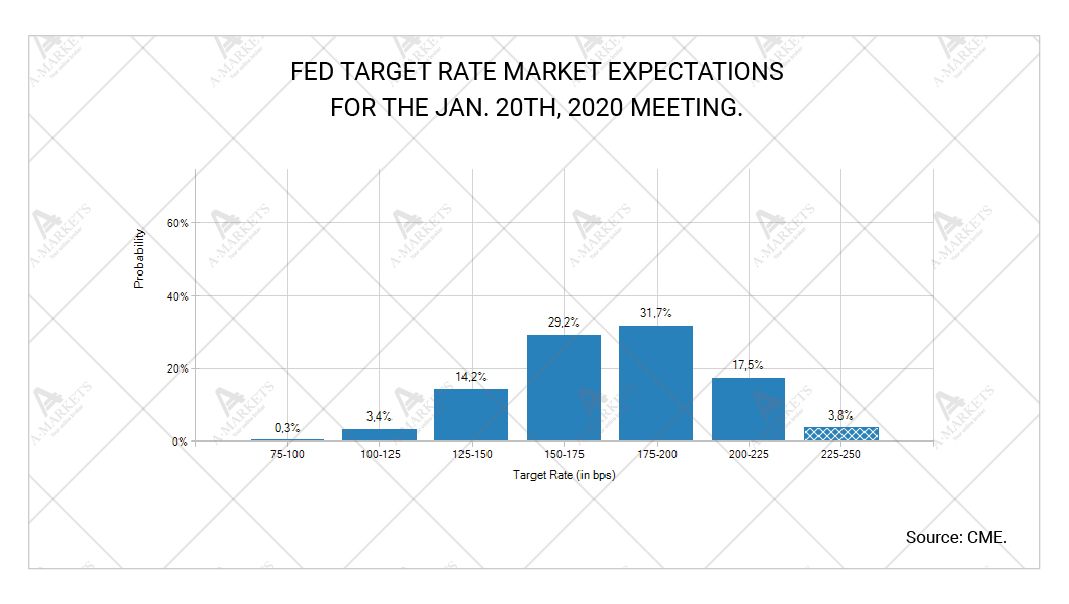 Third, commodities that are most sensitive to growth have already been suffering for some time. Copper remains under pressure with prices dropping firmly below 6000 in May. Over the course of one week, oil crashed, and the front-month Brent future is trading around $63 at the time of writing. The asset class to reprice is the emerging world. The Asian currencies were first to realign to new realities. The Korean won has lost 11% of its value YTD, the Mexican peso went down by 3% just this past week. Unfortunately, this might be a beginning of a larger trend. The DM stocks and EM fixed income will be the last risk markets to react. 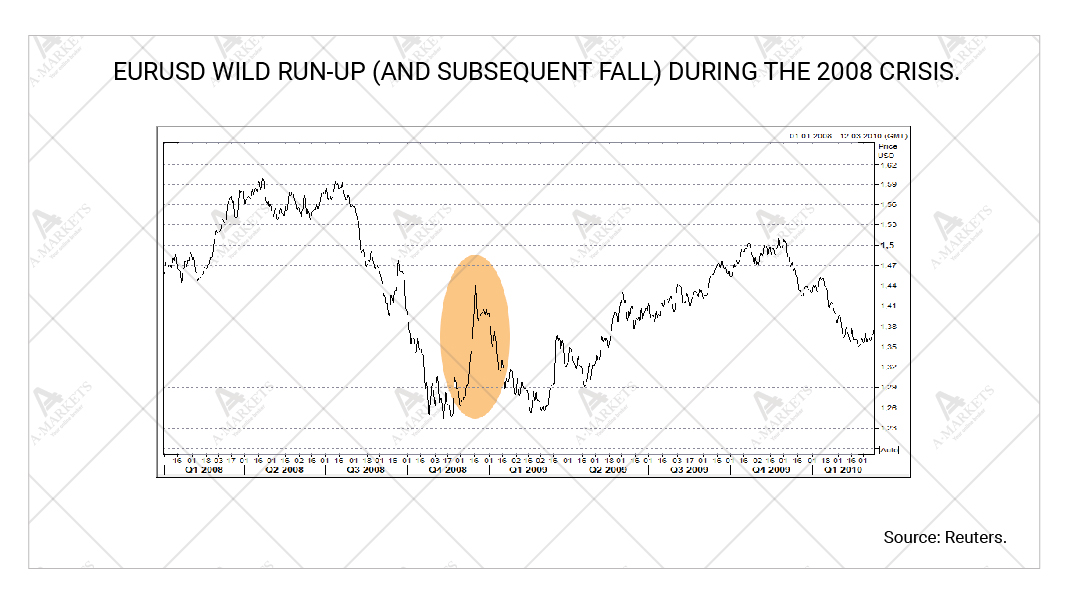 As far as the DM currencies go, we still expect the volatility to return with vengeance. EURUSD has been stuck in an abnormally narrow range. Yet volatility is a clustered process, which means this is to be balanced out by a period of extreme fluctuations. However, the euro might prove difficult to trade. Over the course of the last economic upturn the ECB was unable to raise rates, and the EUR has become a funding currency. The unit might actually benefits as risk is taken off the table. A similar thing actually happened in 2008. Back then, on Dec. 1st EURUSD was trading at 1.27. On Dec. 17th, it was quote at 1.44. Arguably, during the Great Recession the euro-dollar FX rate did have pronounced trends: going down over 2008 and then up in 2009. This time around, it might be just unexpected large swings in both directions.

All in all, we suggest a very cautious approach to the market. Our general view is that risk rallies should be sold into. We prefer shorts in high-yielding units and go long the USD and CHF versus select counterparts (details on that below, as usual). At this point, our judgement is that critical damage has been done. 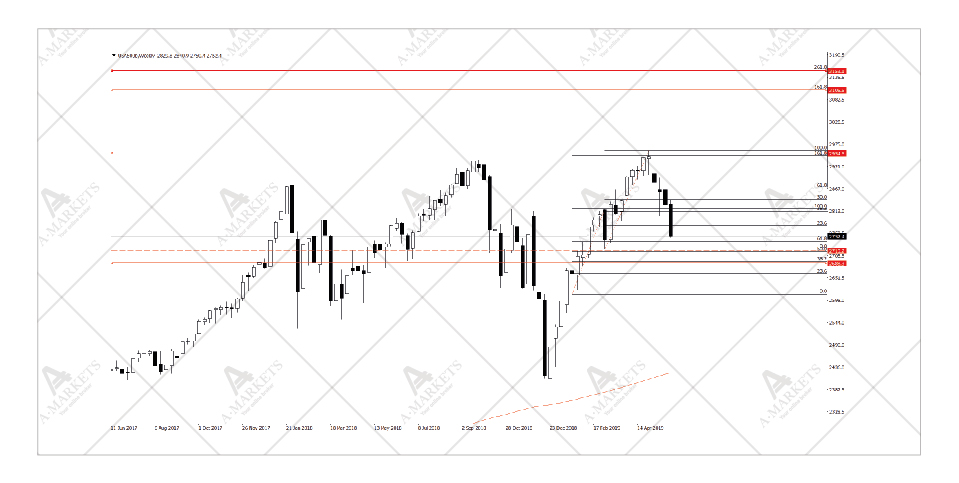 Markets were very active in May, and many of the risk assets have receded to critical support levels. Of note, the US stock market is also on the list. S&P500 has posted a bearish reversal on the monthly close. The last time this happened in July 2007.  Of course, history does not repeat, but it does echo. And it is definitely worth remembering what followed. Over the summer of 2007 the index managed to reach a new marginal high, and then in October the bear market set in. As mentioned above, there are more fragile asset classes due for significant repricing. Under a textbook scenario, EM currencies and FI should sell off first, and only then the U.S. equities are expected to follow. Therefore, theoretically there is a slim window for the stock rally to extend.

But life isn’t a text book, and one has to be extremely cautious. S&P500 has a very strong support in the 2720-2740 area. However, should that fail, the setup would change dramatically. A weekly close below 2700 would be the first sign that the bear market has arrived. It normally lasts 1/3 of the bull run, which implies a stretch of 2-3 years. The ultimate targets on the downside would then be 2060 and 1620 in the worst-case scenario – a downside of 25% and 30% from May’s close. Now, if the 2720-2740 support holds, the market might as well test the 3000 mark. We shall go aggressively short the S&P500 in that case. 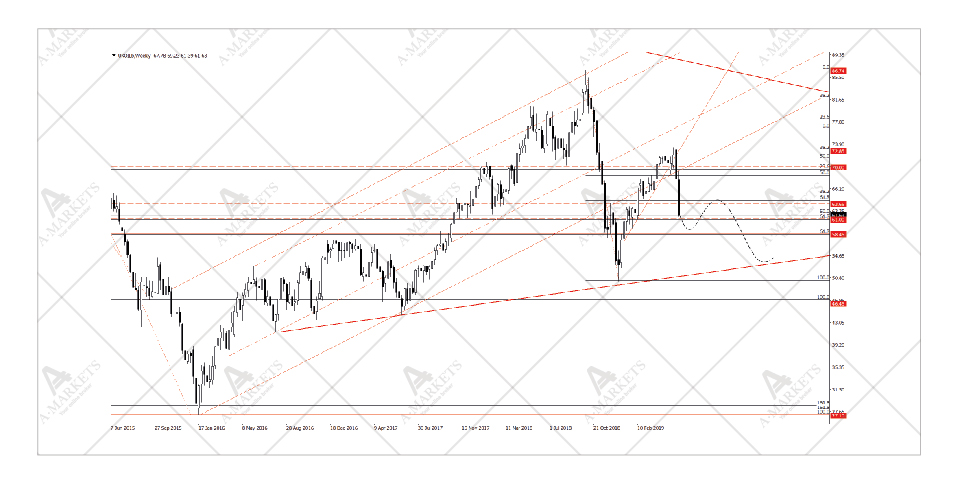 Oil: where prospects have already been damaged.

The commodities sector is behaving just the way it should. First, the U.S. (and global) yield curve inverted, and that was accompanied by falling copper prices. A few short months later oil followed suit. Trading in the crude sector has been very active, and most of it is selling. We are seeing textbook patterns here. Both Brent and WTI have breached medium-term support levels on the monthly close, inflicting heavy technical damage. The confidence in further downside is fairly high, but, again, there are two plausible scenarios.

The milder case is oil stabilizing in the mid-50’ for Brent and mid-40’s for WTI. That would keep the prices within a long-term triangle pattern, and leave meaningful space for a recovery towards $60 and $50, respectively. However, the entire rally from the $27 low of 2016 to the $86 high of 2018 is in itself only a corrective move after the 2014-2016 oil price collapse. Eventually, the market is set to retest the lows (again, $27 for Brent). Trying to catch the bottom might be a pricey exercise, and we prefer to stay short and add to the position. 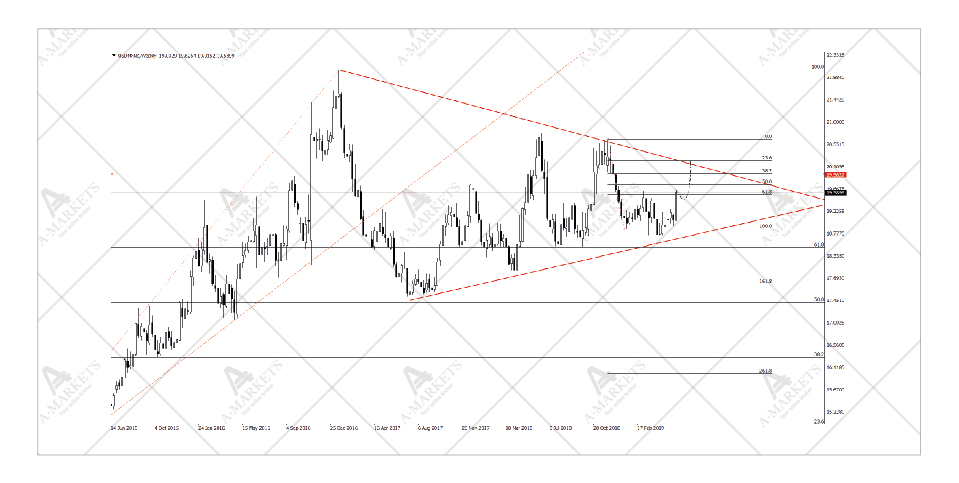 There is little doubt that actions taken by the U.S. administration will complicate things for Mexican economy. However, from the technical viewpoint, the reaction in the peso has been fairly contained. Yes, the unit did see a 2.5% one-day move, but the unit remains within a long-term triangle pattern. The probability of re-testing the upper bound has significantly increased, and we believe the risk-reward profile of going long USDMXN is favorable.

On the fundamental side, it is not only specifically the new tariffs, but more so the general worsening of financial conditions. As mentioned above, we are inclined to sell risk-related EM assets, and definitely see an opportunity here. The technical setup should also eventually resolve in the resumption of the long-term uptrend. This is basically just one of the many markets currently on the edge. If/when the 20.2 level is taken out, the move will turn impulsive.