2019 has arrived, and with it came a recovery in investor risk appetite. The market has bounced back from December’s sweeping wave of selling, when investors that had wished for a Christmas rally got a Christmas nightmare instead. This eventually evolved into diminished liquidity; volumes in the FX markets dropped to record lows around New Year’s Eve. As a result, major crosses exhibited extremely sharp moves, with the magnitude of several percent within a few short minutes. We advice to keep that in mind when evaluating your 2019 trading opportunities as less liquidity and more volatility will be the key trends for the year. 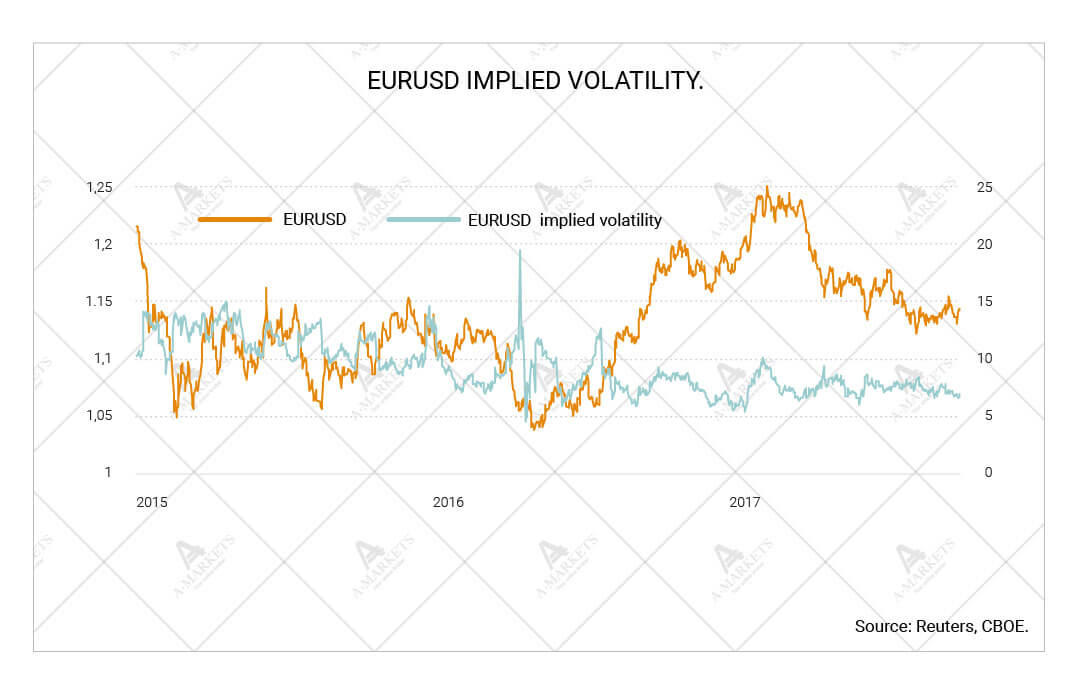 That is, of course, not to say that the four-figure swings are the new norm. But the main pairs that are currently trading flat will see a sudden move, and it is extremely hard to tell which direction it will take. The change is unlikely to come in Q1 though as we expect EURUSD to remain trendless while risk-related currencies—the GBP, CAD, AUD, and NZD— are set to rebound. What’s perhaps more interesting are EM-assets, specifically the Russian rouble and Mexican peso (more on those below).

Let us now focus on the mid-term and delve deeper into the reasons behind the dollar weakness. Why is this important? Because the absence of dollar strength implies there’s something really powerful blocking it. Dollar yields—both nominal and real—are now the highest among DM-currencies. USD fixed income returns are better than the once-unbeatable AUD and NZD. To top it off, starting late 2018 the dollar is also buoyed by acute risk aversion—and that didn’t necessarily instigate more demand for the USD: yes, the dollar did strengthen against emerging-market currencies, but that was rather the fruit of local funds exiting the EM than massive flows into the USD.

The blame here is on America’s double-deficit problem. This term is used to refer to a situation when a nation runs both a current account deficit and a budget deficit. What’s unique about the U.S. economy is that it is structured in a way that the fiscal and external deficits move in tandem, which is why the phenomenon is also referred to as twin deficits. 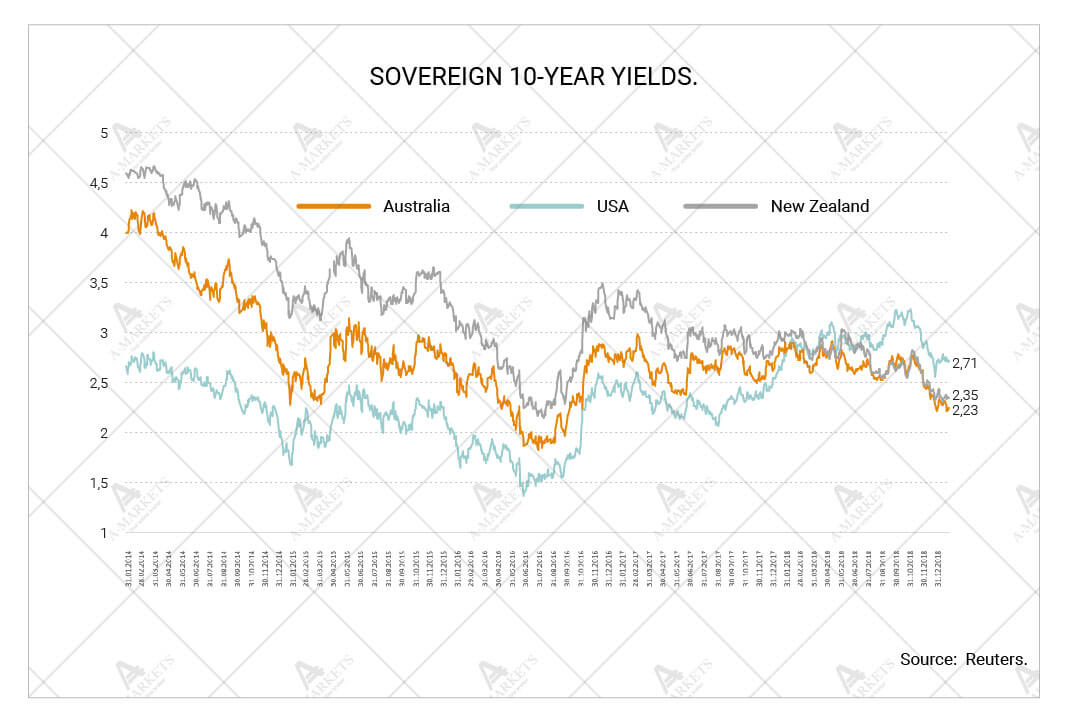 The term originated back in the 80s, when large current account deficits were accompanied by large U.S. budget deficits. Renowned Harvard economist Martin Feldstein famously linked the two and termed them as “twin deficits.” Interestingly enough, he coined the phrase while examining abnormal dollar strengthening.

Since the gold standard was abandoned in 1971, the U.S. economy has run itself into a high twin-deficit situation for a total of five times; two of those cases were followed by considerable dollar gains, while the other three times it took a dive down. So, statistically speaking, a deficit spike in itself isn’t much of a factor—it’s the context that matters. We’re not going to delve too deep into the economic theory here—we’ll focus on applying that theory to today’s environment instead. 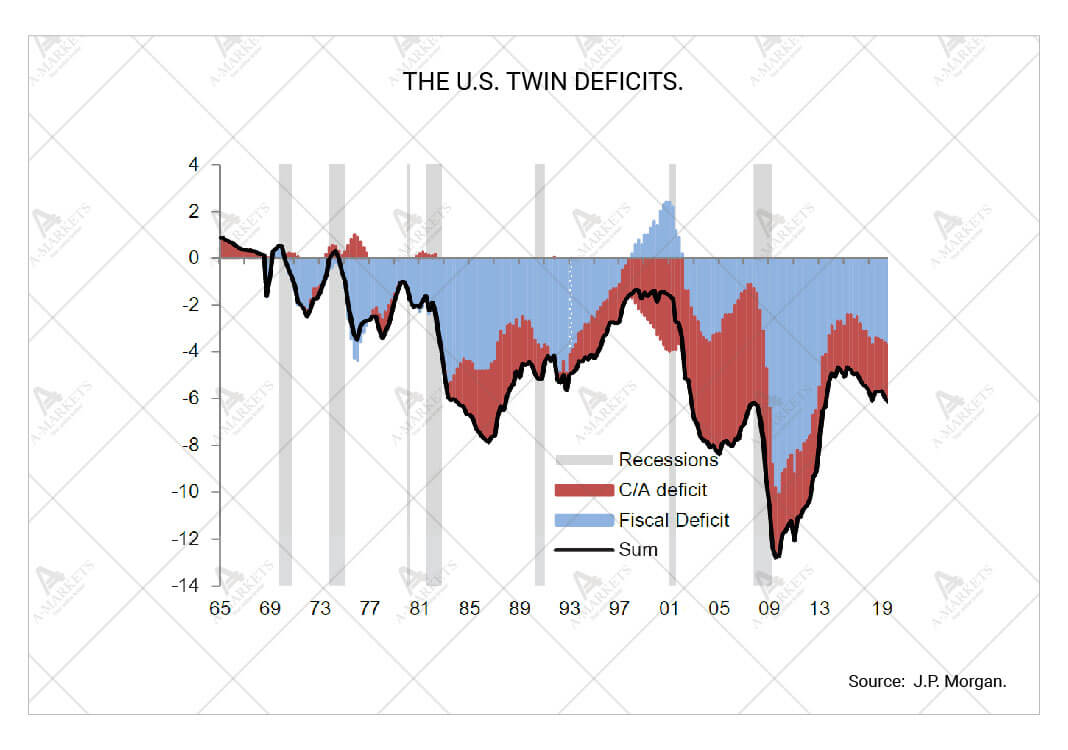 The first factor is the stage of the economic cycle. While the U.S. economy is certainly slowing, there are no signs of a recession on the horizon. Capital investments are still high, and the labour market remains overheated. This virtually guarantees that the growing budget deficit will support private demand, which, in turn, will result in a growing current-account deficit. Matter fact, what we’re seeing now are mutually reinforcing deficits. There’s no such trend during a recession: the extra demand coming from a looser fiscal policy only makes up for the decreased aggregate demand. That helps smooth the cycle and allows for tighter monetary policy. In today’s reality, however, that would only make financing deficits harder.

The second factor is how the Fed responds. We estimate that it would take a rate hike of 200-250 basis points and/or a 100-125 bps increase in 10-year Treasuries for the tax reform to be fully absorbed by the debt markets, with the dollar exchange rate unchanged. That appears to be close to impossible in the current climate, meaning that the greenback will have to absorb at least some of the effect on its own. To run the opposite exercise, assuming rates remain unchanged, our model estimates suggest a 7-8% drop for the dollar index. In reality, however, we will see a combination of both, but we do believe the USD will have to bear most of the burden.

Finally, the third factor is the levels the deficits as they begin expanding. This is, perhaps, the only relatively good news for the dollar. The current 5% of the GDP is a decent level compared to the previous twin-deficit crises, which is largely explained by the progress in eliminating the imbalances in energy trading. This puts the U.S. in a much better position than, say, the UK before the Brexit where the current account deficit alone was about 6% of the GDP. As soon as foreign investors stopped financing London’s needs, the sterling had to correct itself from above 1.45 to about 1.2. The dollar is in a better position, but it still has some weakening to do. 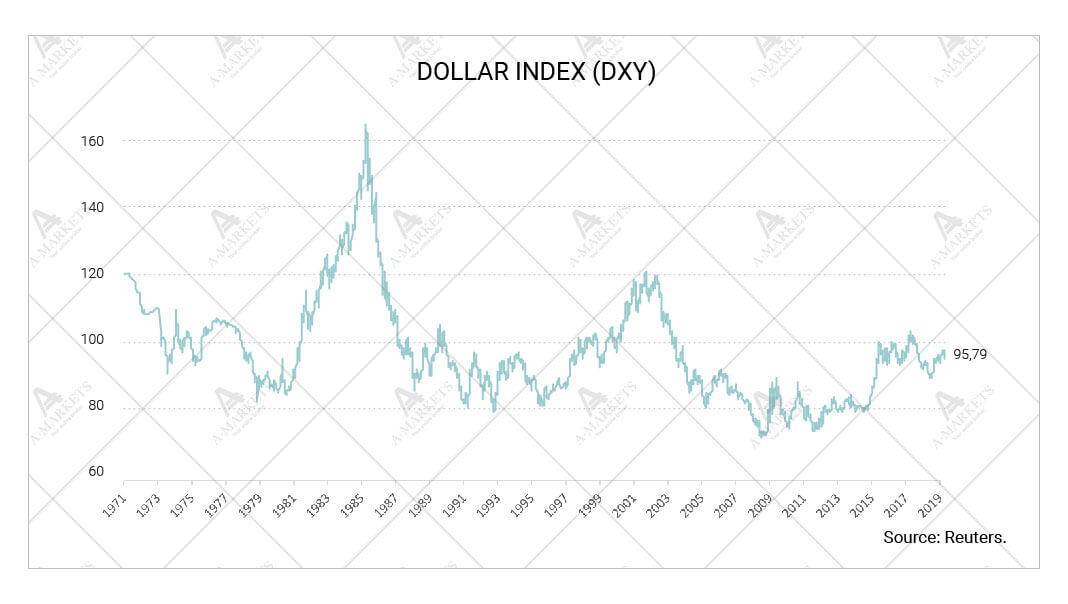 The bottom line is that the USD will need to decline by at least 5% in 2019. To complicate things further, volatility across the FX is picking up, which could actually benefit the greenback in the short-term. We interpret this as an opportunity to trade against the USD, but only when once there’s some local strengthening. It is clear that EURUSD, for example, hasn’t seen any moves lower for a while, and buying at these level isn’t reasonable. On the contrary, the pound or even the rouble have already taken their legs down, and it made sense to buy them out.

Again, understanding the U.S. twin deficit problem is extremely important as the spillovers from Trump’s tax reform are precisely what’s keeping the dollar from strengthening and the reason we’re waiting for good entry points to short USD. The key trends will be shaped by the economic imbalances and how the Fed chooses to handle them—the rest of the stories, no matter how important they may seem, are just noise. 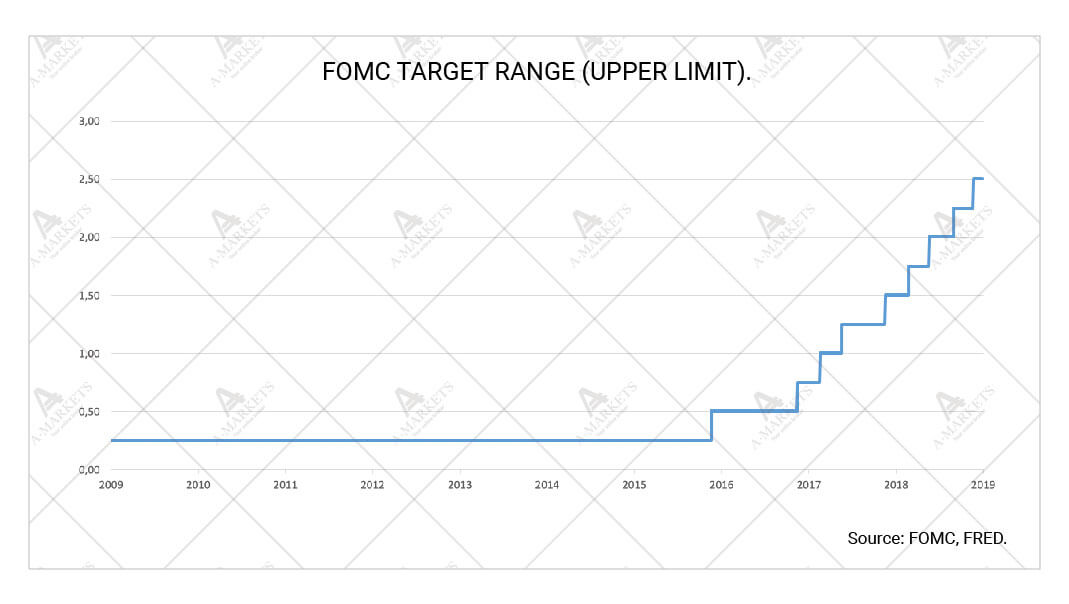 Take the news flow surrounding the shutdown of the U.S. federal government for example. It does seem like a massive story, and many market players are keeping a nervous eye on it, but the truth is that the American establishment is very well aware of the potential implications of the shutdown and will be ready to end it before it causes any serious damage. The only risk factor here is the response from credit rating agencies. S&P already downgraded U.S. Treasuries to AA+ from AAA back in August 2011, and now Fitch is warning about the same risk as well. At the moment of writing this review, Trump has agreed to reopen the government—but only temporarily and federal agencies may be left without funding again as early as February. Should rating agencies follow through with any downgrades, the dollar will respond negatively.

But, barring any major shockers, the main themes for the FX market will remain the same. First is the growing demand for high-yielding currencies. Second is the pound’s recovery on the back of talks of a second Brexit vote. The next Fed meeting, scheduled for January 29-30, is unlikely to ruffle any feathers either. Chair Jerome Powell has already given a clear message: the central bank is watching and is not in a rush. This is sufficient to keep market players at calm for now. 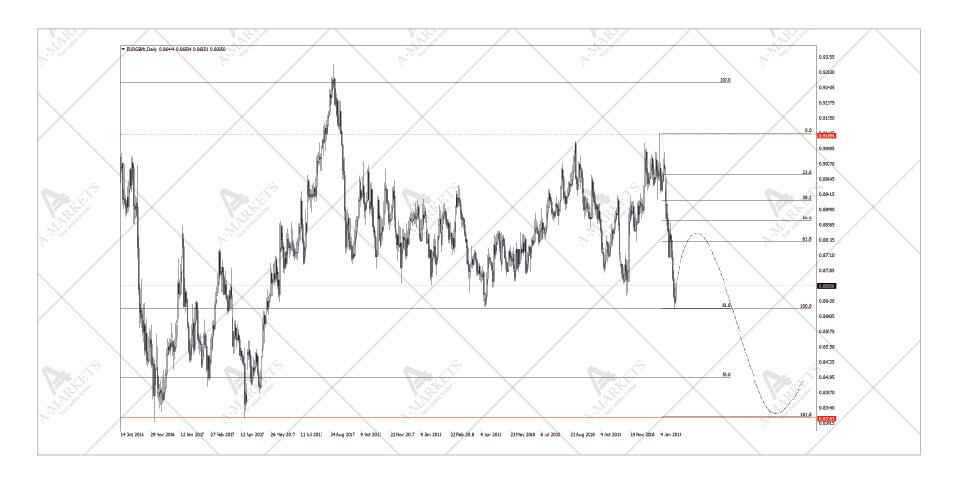 The vote on Theresa May’s Brexit deal was a local, but nonetheless important January story. The plan has failed miserably, with the scale of rejection so shocking that Brexit scenarios previously considered close to impossible are now back to the forefront. The first scenario is a “hung Brexit,” which is something the British parliament clearly wants, but would have to get Brussels to agree to that first. The second option is a second referendum. This would certainly be a massive blow to the country’s democratic values, but, considering how painful the EU divorce has been so far, it doesn’t sound too far-fetched. And, the third one is, of course, a no-deal exit.

The technical picture suggests that the third option is definitely not the baseline scenario. The sterling is making a solid recovery. The key resistance level for GBPUSD stands at 1.34. Breaking through that mark opens up signficicant upside potential, but we still refrain from trading the pound-dollar pair as the near-term outlook for the American currency is too uncertain. A safer bet would be the EURGBP cross—it has a clear critical support line as well at 0.86. The pair is still consolidating from its 2017 highs and should soon move towards the 0.832 area. The farthest target lies at 0.8196. 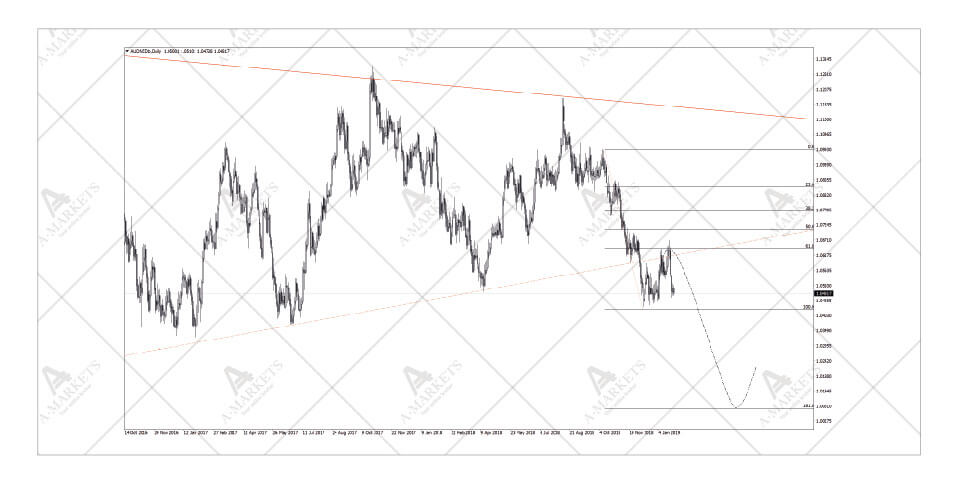 Going short AUDNZD was one of our mid-term trade ideas for 2019. However, the new year’s volatile first week sped things up and profits were locked in during January’s early days. Nonetheless, that certainly is an exception and the general idea remains relevant. From the fundamental viewpoint, it boils down to Australia’s vulnerability to a slowdown in China resulting in policy differences between the Reserve Bank of Australia and the Reserve Bank of New Zealand.

From the technical point of view, the pair is consolidating at multi-year lows. These lows were tested in the 80s, then in the 90s, and then again in mid 00s. Each time the rates then returned to the 1.3 area. Historically, the pair reaches its lows as the economy cycle nears its peak, while highs are touched during recessions. This time, however, the rate has been sitting at global highs for 4 years already. We believe that the reason is that the global economic slowdown is now centered in China, rather than the U.S., and it’s unlikely to change in the coming months. We expect the Australian dollar to weaken towards parity against its New Zealand counterpart. The technical picture favors that outlook.

USDRUB: playing the market’s underexcitement.
We remain short USDRUB at 68.8, moving the target to 63.1, and lowering stop-loss to 68.8 (entry-point).

Jerome Powell’s shift in sentiment towards the end of 2018 sent risk-related assets higher, and while the Fed’s support won’t last long, the uptrend isn’t over yet. On the FX market, the biggest winners are emerging-market currencies, specifically the Mexican peso and Russian rouble. We expect the entire EM-space to continue growing through Q1, and see any counter-trend moves (i.e. USDRUB higher) as an opportunity for a speculative entry.

Short USDRUB trade doesn’t look too bad from a fundamental viewpoint either. It was one of our top trade ideas to look out for in 2019 after the rates demonstrated an unusual activity in December. There’s still a lot of shorts build-up in the rouble, which gives it enough momentum for further growth. Note that local markets are yet to price in the U.S. lifting sanctions on companies controlled by Oleg Deripaska, which is actually highly important for investors view on the Russian assets. Another factor to note are stablizing crude prices. We expect commodities to consolidate through H1 2019 after last year’s crash, which will help to drag USDRUB down to 63.1.